As published in The Charleston Gazette

CHARLESTON, W.Va. — Walking along W.Va. 61 by the Kincaid Post Office, I picked up a small piece of coal dropped from a speeding coal truck. Looking at it and reflecting on the work of a dysfunctional Congress, death warrants of Massey’s Upper Big Branch management, lack of decent jobs with benefits, and the harsh financial reality that hits many after the holidays, we are to be reminded that a lump of coal appeared in many stockings this season.

News accounts reveal that those who have little will pay the most for the economic survival of this country. One example is West Virginia Legal Aid, which no longer can provide a decent level of justice for the increasing number of low-income people who have domestic, landlord, bankruptcy and benefit problems.

A second is a plan by tea party Republicans, as reported in the Gazette, that would direct “70 percent of the federal spending cuts at safety-net programs extended to help tens of millions of low-income people.”

Andrew Fieldhouse, a budget expert with the Economic Policy Institute, noted that the plan was cruel, and it is “inexcusable to cut supports that help those adversely affected by the economic downturn.”

Alan Viard, a budget analyst at the American Enterprise Institute who served as an adviser under former President Bush, agreed by noting that the plan would place a “disproportionate burden on low-income groups.”

A third indicator is obvious in housing. Various HUD and USDA programs that make it possible for low-income people to obtain single-family homes or rehabilitate/repair their Jenny Lind owner-occupied homes have been zeroed out or significantly cut-back. New residential construction is primarily moving into rental housing as families who need housing struggle with credit, eligibility and employment.

Even unionized workers feel the squeeze. As manufacturing continues to be out-sourced and off-shored, the Bureau of Labor Statistics reported that the percent of private-sector employees in unions has dipped to a 100-year low of 6.9 percent. Those who relied on contract agreements are not exempt either, as noted at Century Aluminum in Ravenswood. There, as reported by the Gazette‘s Paul Nyden, Century unilaterally decided to “reverse life-long health benefits that retirees were promised in a labor contract the company signed with the United Steelworkers of America.”

Many union contracts have been nullified as companies declare bankruptcy, only to be snapped up by other firms, such as Massey/Alpha and ICG, as union-free viable entities.

Low-income people are easy targets. They are not as likely to vote as others, and groups like Acorn that attempt to change that dynamic have been banned by Congress. Elections increasingly have low turnouts, which often means that 20 percent or less of those eligible to vote make decisions.

Those decisions are skewed in favor of issues that benefit those who vote since politicians understand that re-election depends on addressing those issues.

One cannot expect that those who use, have or are beholden to wealth for political power will use any opportunity to tax themselves or their supporters. Furthermore, those on top like to reinforce the impression that those who have the largest portion of the economic pie are brilliant and deserve economic incentives. Those on top also tend to view those on the bottom as having “sinful vices.”

Thus, those on the bottom become vulnerable, taxable targets because their vices are viewed as “needing correction” and because they are divided, powerless and must spend all of heir money on basic goods.

A good economic system should provide for the needs of all people with fairness, respect and justice. When a system fails to do this, various kinds of instability lurk on the horizon. We are lunging in that direction, without doubt, as we greet another new year with our society breaking apart as the result of economic apartheid.

David, a professor at WVU Tech, is a Gazette contributing columnist. 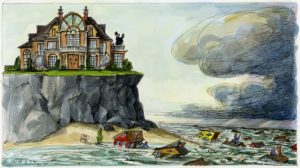